2016 was a big year for Beyond Extreme Energy. In addition to standing with those on the frontlines of the struggle against the fossil fuel empire, and supporting frontline groups through our Frontline Community Support Fund, we coordinated several major actions and campaigns to further our fight against the Federal Energy Regulatory Commission.

Among them was the Rubber Stamp Rebellion. From May 15 to 20, thanks to outreach to allies around the country, we coordinated 20 actions under the Rubber Stamp Rebellion banner and used the week as an opportunity to network and build connections across geographically separated fights. Meanwhile, in Washington, DC, we made our efforts to stop FERC’s violent rubber stamp machine more personal by holding demonstrations outside the homes of the FERC commissioners. The message was clear and simple — those who wreck our safety, health, and well-being have names and addresses.

Beyond Extreme Energy is in the serious business of fighting for our lives and livelihoods, but we like to do so in creative, engaging ways. Pancakes, Not Pipelines embodied that spirit perfectly. On March 24, to help tell the story of the Holleran family, whose maple syrup farm was seized and destroyed by a pipeline company thanks to a FERC permit, we used solar power and the last dregs of maple syrup from the Holleran farm to serve pancakes in front of FERC. 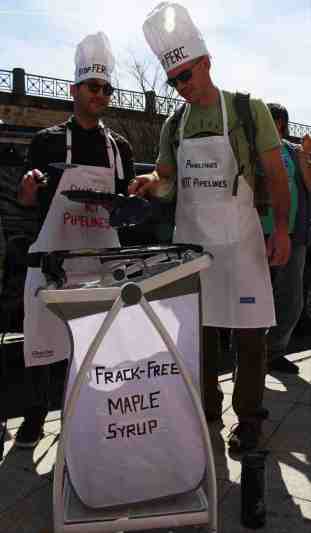 In a similar vein, when thousands of activists poured into DC to get money out of politics as a part of the Democracy Spring campaign, we hosted an event at FERC called Dunkin’ Democracy. We supported Democracy Spring activists by serving breakfast to them, but also continued our work of exposing corruption at FERC by holding a teach-in. 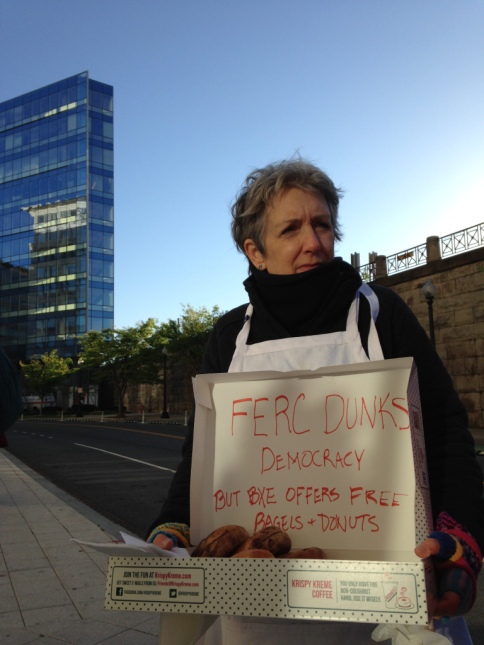 And let’s not fail to mention how, on Valentine’s Day, we worked with friends and allies to flood FERC commissioners with snail mail from the frontline communities they hurt. The artwork below is a Valentine card sent to FERC commissioners by Jenny in PA, one example among many that were sent. 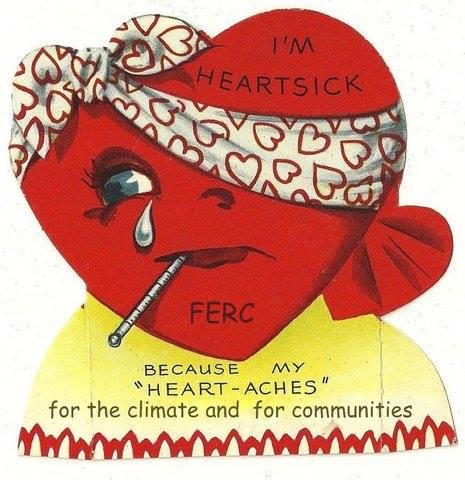 We hope to continue building on this kind of creative engagement through 2017.

Speaking of BXE’s uncompromising creativity, 2016 was the year we gained notoriety in the U.S. Senate. In June, Sen. John Barrasso (WY) stood before the Senate Energy and Natural Resources Committee and called Beyond Extreme Energy a troubling group. Beyond Extreme Energy seeks to circumvent FERC’s purposeful intransigence to the needs, wants, and rights of the people. Perhaps that’s what Barrasso found so threatening. To read more about Barrasso’s words for BXE, and to see our response, click here.

We are a necessary thorn in the side of those who stand with the fossil fuel empire when a just and rapid transition  from fossil fuels is desperately needed.

Being a thorn is something we cultivated well in 2016. Just look at our blockade of the DNC’s national headquarters in Washington, DC. We did so ahead of the convention in Philly as a way to pressure Democratic leadership to include a fracking ban in the party platform, among other demands.

Similarly, click here to see our guerilla radio broadcast outside FERC on the day commissioners held a hearing on the methane leak at Aliso Canyon. While FERC was trying to figure out how to reopen the facility, we were providing a platform for the truth on the sidewalk outside.

Big flashy actions are one thing, but so is persistence. 2016 was our second consecutive year disrupting every single one of FERC’s monthly Commission Meetings along with our allies across the country.

We want to continue disrupting FERC in 2017. 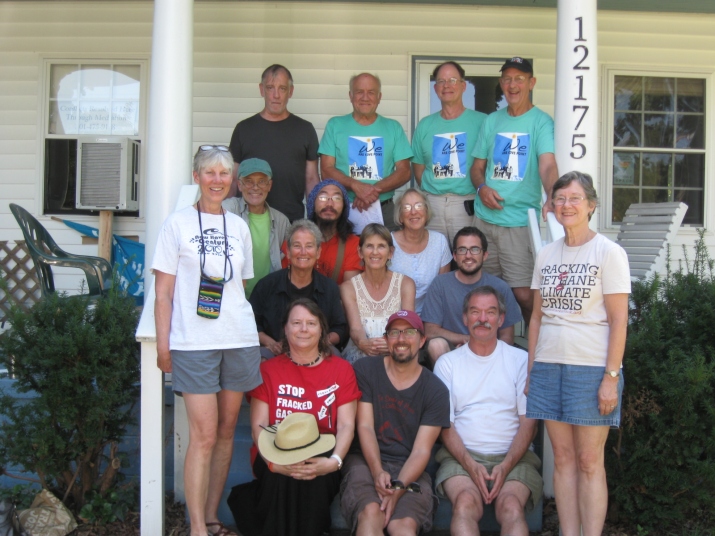 Beyond Extreme Energy at our 2016 Retreat in Lusby, MD

The hours of daylight grow longer following the Winter Solstice (Dōngzhì, Saṅghamitrā, Yule) and from my past year of journeying with courageous people who are illuminating others along the way to the call of cultivating resistance with the precious time we share together, it is my hope that this message as well as my lengthy “2016 Year In Review” will help inform, inspire, and connect the people with whom I work as well as those with whom I hope to build with in the years to come.  I do not expect emulation, but welcome evolutions in direct radical solidarity practice as well as carpooling.  😉

My name is Jimmy Betts, a Community Support Organizer (CSO) with the Beyond Extreme Energy (BXE) Collective (facebook).  For the past 2 years, I have been an intentionally itinerant collaborative organizer who works with front-line & impacted communities, organizations, and individuals throughout the so-called United States — often in the development of emboldened non-violent direct action strategies and tactics with people developing more effective campaigns in the areas of creative intersection between Indigenous restoration, climate, environment, energy, faith & racial justice.  In a smaller capacity , I also offer interpersonal & process facilitation, personal support for organizers who are constantly under pressure, and I have found these to be some of the most cherished experiences, not only in  knowing  the issues & the analysis of conflict, but in better envisioning what we are building & protecting and why we are together in these moments.

Since this is my first time sending you a message through our new system, I hope to be able to continue to report, share, and provide ways to support my work and especially the work of communities to whom I have the privilege of offering myself.  Where possible, I have links to individual organizations so you can learn more directly.  My greater desire is that you, your friends, and our extended circles of influence & trust may feel more prepared to participate directly in active campaigns of life-giving, self-determining water-protecting prayerful action as well as efforts to organize beyond…

I will attempt to speak of my personal experience regarding movement moments and interactions as best I can and to the extent that I can share.  I will do my best to speak from my position outside of captive NGO organizing structures and also consistently affirm that I reserve the personal humility to change my mind as my analysis changes.  If we can allow this of ourselves (to make mistakes, maintain love for oneself, and evolve with increasing grace), perhaps others will be able to admit faults and be embraced rather than be rejected based solely on a change of position, a shift from ignorance, our relationships with others, our affiliations with feuding organizations, etc.  This is part of the work and the education of ourselves at present and the preparation of our youngest generations is not a passive happening.

As I continue in my understanding & work with Land Defenders & Water Protectors, I know that though the times ahead may seem daunting, I have faith in this process of decentralized (dissentralized) building across geographies, within watersheds, along pipeline project routes, between corporate power structures, beyond colonial borders, and through histories of religious & spiritual guidance.

I will be in the Gulf South and Southeastern U.S. to begin 2017 with Water Protectors fighting multiple fossil fuel pipelines, and will allow my experiences to reveal and my allies to inform the creative routes of connection moving forward.
I thank you for your diligent work and encourage you to support our work by making a donation today. 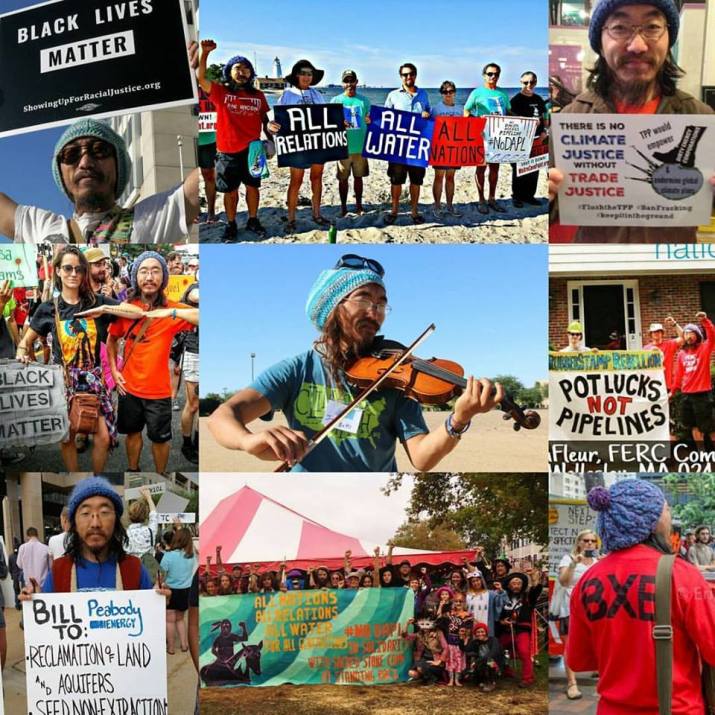 As we know, giving a small but recurring donation throughout the year is the best way to provide stability to struggling (OR small) grassroots organizations. BXE is no exception, and the Community Supported Organizer project is a rewarding way to do just that. By pledging monthly donations to one or both of our two paid organizers, Jimmy Betts and Lee Stewart, you will help keep our small but effective operation humming along. This is what I’ve decided to do and I’ll tell you why.

Jimmy and Lee have been with BXE from the time of our first big action at FERC, in November 2014, after they walked across the country from coast to coast as part of the Great March for Climate Action. Talk about dedication! And they’ve brought that dedication to their work with BXE, organizing literally around the clock to expose the role of FERC in the build-out of fracked gas pipelines and other infrastructure that is abusing residents of host communities and exploding our nation’s carbon budget by filling the atmosphere with climate-destroying methane.

Lee is based in D.C. and is BXE’s administrative staffer, keeping tabs on our myriad efforts to highlight FERC’s rubber stamping policies, dreaming up creative actions and building coalitions with other like-minded groups.

Jimmy is our traveling organizer, and the man never rests. Whether he’s in solidarity at Standing Rock in North Dakota, fighting the Sabal Trail pipeline in Florida, or anywhere in between, he is constantly working with frontline communities and building links with our work in D.C.

These two young people are literally fighting for their lives and for the survival of our beautiful planetary home. As an elder, I can’t really understand – no matter how hard I try – what they will be facing as they grow to be my age, but I know that I will be on the front lines with them as we fight together. I also know that as someone with significant disposable income, I am in a position to really make a difference in the functioning of an organization like BXE, which, with its focus on coalition-building and non-violent direct action, is playing an indispensable role in our resistance to fossil-fueled climate chaos.

I’m supporting Jimmy and Lee with a monthly contribution of $100 each. Please consider what you might contribute to the success of our efforts, no matter how big or small. BXE is a lean machine and every dollar will go a long way.