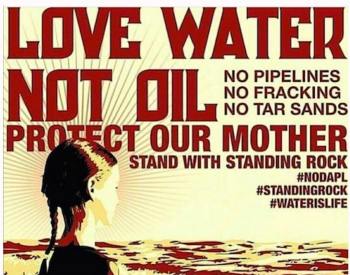 On this Veterans Day, let’s remember those who have laid down their lives for their communities, great warriors like Tatanka Yotanka (Sitting Bull). Let’s remember that there are Black and Brown Warriors today putting themselves in the line of fire to protect the water and land that we all need to survive. How should we honor them? The answer is quite simple: Join them, not just in thought or spirit, but in willingness to make material sacrifice.

Donald Trump is going to be our next president, and thousands of angry white liberals and the NGOs funded by them have taken to the streets. They’re marching, chanting, and waving signs. Do you know who cares about these marches? No one. At least no one with any power to change anything.

You’re probably going to be mad at me for saying that. I’ve been a part of more than my share of these kinds of demonstrations and have worked for the NGOs that uncritically choose these tactics, and I would have been mad at me once upon a time too. That’s ok. Get mad at me; I’m used to it. But while you’re getting mad at me, find some space for self-reflection.

Some have called for love and unity to win over Trump supporters. Knowing that two out of three white voters voted for him, there’s an exceptionally high chance that, whether you’re aware of it or not, you already love at least one, and probably more, of his supporters. And what has that accomplished?

Now look, I’m not dismissing the value of love and unity, but love and unity for who? While you were campaigning, marching, having drum circles for Bernie, and waving Love Trumps Hate signs, the Standing Rock Sioux have been risking their lives and building the historic unity you claim to want in their efforts to stop the Dakota Access Pipeline. This movement is so much more than the #NoDAPL hashtag. Native Americans have been giving up their livelihoods and leaving their homes to charge fearlessly into what fossil fuel companies, and the law enforcement that protect them, have turned into a war zone. Knowing they will be tear gassed, arrested, and shot for their actions, they continue to hold space between the water and the oil for their prayers. Because of years of genocide and whitewashing, many Indigenous, Xicano/a, and Black People who are putting themselves in the line of fire in North Dakota and elsewhere know what we whites are only barely beginning to learn: We cannot trust this current oligarch system to save us. Maybe it is harder for us to see that because it is our people that built this system of oil and death.

So yes, let’s focus on love and unity, but what does that look like? If a gun is being pointed at someone you love, do you organize a march in a safe protest zone? No, you get between them and the shooter. If someone were about to poison a loved one, do you wave around a sign begging them not to? Or do you take down the poisoner even if it means you will face legal repercussions? If someone you love is dying do you wait until you have the chance to vote for someone that might kill them slower? Or do you drop everything to go help care for them?

We must also remember that love is hard work. Love is sacrifice. Real love means risking our own comfort, our own economic security, even our freedom and our lives to protect what we love. If we aren’t willing to make those sacrifices for the Indigenous People in Standing Rock who are, as you read this, risking everything to protect the water we all need, then stop claiming that you want love and unity when you are simply asking that, like the pathological love of an abuser and their victim, you can take their love while giving nothing in return.

In other words, it’s time to stop marching and waving signs. It’s time to flat out put our lives and bodies on the line to halt this poisonous system in its tracks. It’s time to physically stop the pipelines, the ships, the construction, the monetary exchanges and anything that keeps fossil fuels flowing even if it means losing your job, spending time in jail, or being physically harmed. Otherwise, you better stop talking about love because you know nothing of it.

If you are travelling to Standing Rock, it is imperative that you read this Resource Packet before you go: http://www.standingrocksolidaritynetwork.org/resource-packet.html

Please pay special attention to this section before travelling:

Good reasons to go: • To commit civil disobedience blocking construction of the pipeline. • To do needed physical labor • To deliver supplies • To bring a necessary skill • To bring messages of support from your national or tribal group and share your traditional ceremony and culture • To support the presence of young people or elders • To provide media coverage and documentation   Not good enough reasons: • To experience indigenous culture and wisdom • Because it seems cool • Curiosity

There are also many ways that you can support the movement locally. Here is a power map that will help you identify local targets: http://tinyurl.com/NoDAPLPowerMap