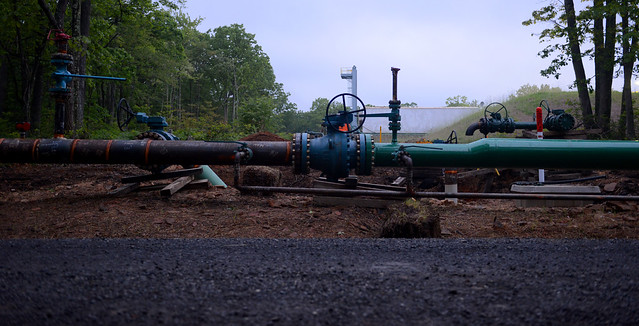 Pipeline construction alongside Pennsylvania state forest roads that were blocked for a day by protesters in the spring of 2014. © Kyle Pattison for Public Herald

Benton, PA On Tuesday, June 9th 2015 at approximately 9:30 p.m. the Williams Transco pipeline running along the Lycoming/Columbia County line ruptured, releasing gas into the air, according to a phone call with the Pennsylvania Department of Environmental Protection. Nearby residents experienced confusion and fear upon feeling the impact of the explosion from miles away, hearing a prolonged roar sounding similar to a jet engine, and smelling gas in the air.  After calling emergency services and neighbors, many residents were told that it would be safest to evacuate the area until the problem was resolved.  Williams is the same company proposing to build a 178-mile, 42” high pressure natural gas line through Pennsylvania, which would cut through the Benton area.

“I am a resident of Jackson Township and I live near the village of Waller with my infant son, husband, and many pets.  The rupture last night shook our house from several miles away,” said Alysha Suley of Waller, PA.  “Factual information regarding the rupture has not yet been widely disseminated, but I have learned that the explosion and roaring sounds involved the Williams Transco pipeline.”  Williams is the same company who wants to build a new 178-mile, 42” natural gas pipeline through Columbia County.  Other nearby residents reported the smell of gas in the air from up to 5 miles away, and could also hear the roaring sound.

Tuesday night’s pipeline rupture highlighted the safety concerns of many local residents. This rupture happened just one day after concerned residents of the Benton area came together for the first time to discuss the impacts of even more pipeline development, and how to resist Williams’ proposed Atlantic Sunrise Pipeline.

The Benton meeting and the pipeline rupture happened amidst a flurry of anti-pipeline activity in Columbia County, and Pennsylvania as a whole.  All ten counties that would be impacted by the Atlantic Sunrise Pipeline have seen active resistance to this project. Safety in the event of explosions is the main concern of many.

“Tuesday night was terrifying because of all the ‘what ifs’ it brought up.  The rupture was caused by a pipeline built and operated by the same company as the proposed Atlantic Sunrise.  What if a larger pipeline, or one nearer to our home, had failed?” Suley expressed of her safety concerning nearby existing and proposed gas infrastructure.

Residents of Columbia County have been organizing at the township and county level since last April when the Atlantic Sunrise Pipeline was announced.  The next meeting of concerned residents of the county will be hosted by the Shalefield Organizing Committee and the Clean Air Council on Monday, June 16th at 6:00 p.m. at the Pro Shop Café at the Links Golf Course in Hemlock Township.  An attorney will be present to discuss his legal concerns with the leases Williams is offering landowners along the potential right of way of the ASP.  For that reason, if you are a concerned resident facing a gas lease, you are urged to attend and ask questions.

This meeting will continue to bring residents into a year-long, active movement to prevent dangerous shale gas infrastructure from continuing to be built in our region.  All concerned residents and the local press are invited and encouraged to attend.  Please contact shalefieldorganizing@gmail.com or call 570-204-8927 for more information on the local movement to stop the proposed Atlantic Sunrise Pipeline.

These past few months have been outstanding for the divestment movement. Its been very humbling to see the growing success of fossil fuel divestment campaigns all across the country. This unity of students is a force so powerful that it is changing the way major institutions regard their portfolios and demanding that they use their prerogative to take a moral stand against anthropogenic climate change. I commend all of you for your tireless work to divest your schools from fossil fuels.

Just as many universities are being held accountable for their investments in dirty energy, there is another major institution that is being called out for an alarming hypocrisy. The Federal Energy Regulatory Commission (FERC) is an independent agency whose mission is to “regulate the interstate transmission of natural gas, oil and electricity.” However all of their funding comes from the fees they receive from the fossil fuel industry. Thus their bottom-line is to approve every proposed project for fossil fuel infrastructure p despite how severe the resulting health, safety and climate impacts are.

Watch this video to learn more and fill out this form to participate in a week of action to stop business-as-usual at FERC.

Beyond Extreme Energy is a non-profit organization that formed in 2014, which organized a mass blockade of the Federal Energy Regulatory Commission last November 3rd – 7th. They are committed to transforming FERC from a rubber-stamp agency for fossil fuel infrastructure into a leader in an urgently needed transition to renewable energy to eliminate greenhouse gas pollution.

FERC-impacted areas like Minisink, Myersville, Seneca Lake and Cove Point have been defended by frontline communities that have dutifully abided by FERC’s rules to stop construction of harmful natural gas infrastructure projects. Despite posing strong evidence of health, safety and environmental impacts, FERC has been unresponsive to community voices. When all the legal routes are rejected, nonviolent direct action becomes the last option for people to defend their rights. Acts of civil disobedience are springing up all over the country to shut down FERC-approved projects, which is a tactic we are replicating on FERC’s doorstep.

We will return to FERC this May 21st – 29th to “Stop the FERCus” because we know that the commissioners of this agency are acting as rubber-stamping clowns for the fossil fuel industry. We will once again engage in nonviolent civil disobedience to shut down the building.

As inheritors of the future world, students have a critical voice in the fight against corporate power and climate change. Thus we are devoting a day of “Stop the FERCus” for student activists. We invite you to join us for Divestment Thursday on May 28th to show FERC that the next generation is demanding that they cease expansion of natural gas infrastructure.

To sign up, please fill out this form and we will be in touch with you soon.

Can’t make it to DC but still want to help? Here’s what you can do…

Spread the word: Share this video and tell your friends to join us!

Donate: To support the organizers and housing/transportation needs of participants