Activists called out TD Bank today for its financing of a gigantic, $3.8 billion fracked-oil pipeline that would cross Lakota Treaty territory in North Dakota.

While drumming, chanting and carrying posters and banners, the protesters first walked from Lafayette Park in front of the White House to the TD Bank branch on 17th Street NW. They drew the attention and cameras of many tourists with their call-and-response, “One: We are the people. Two: You can’t ignore us. Three: We will not let you build this pipeline.”

Several of the activists walked into the branch to deliver a letter calling on TD Bank to stop lending its investors’ money to Energy Transfer Partners to build the 1,134-mile Dakota Access Pipeline that would run from North Dakota to Illinois, crossing beneath the Missouri River near Standing Rock Reservation and threatening the tribe’s water supply and sacred and cultural lands.  TD Securities, the bank’s parent, is contributing $365 million to the project.

As the letter-deliverers rejoined the group outside, bank officials locked the doors as the protest continued on the sidewalk.

“This is not just an assault on Mother Earth. This is an assault on Native Americans,” said Caro Gonzales of the International Indigenous Youth Council.  The pipeline originally was to cross under the Missouri River farther north, near Bismarck, North Dakota’s capital. “The white people there said, ‘We are afraid for our children,’ ” she said. So, they moved the pipeline route to “right above Native American territory – that has children. That is racism,” she said. 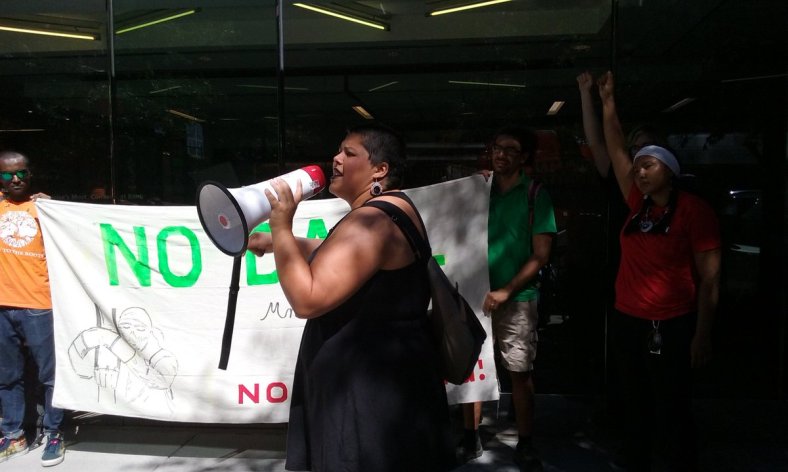 “This is not just an assault on Mother Earth. This is an assault on Native Americans,” said Caro Gonzalez, in town after a 23-hour drive from North Dakota.

The spirited local action, organized by Beyond Extreme Energy, was one of many across the nation this month during Global Weeks of Solidarity, which was called by the Camp of the Sacred Stones and the Red Warrior Camp in North Dakota.  A day earlier, for example, hundreds rallied in front of the White House to call on President Obama to stop the pipeline. In response to the expanding protests, the Justice and Interior departments and the U.S. Army have called for a halt in construction until the pipeline can be reviewed.

After a 23-hour drive from the North Dakota resistance camps, Gonzalez and Lauren Howland had arrived in Washington late the night before. Their first stop: the White House. 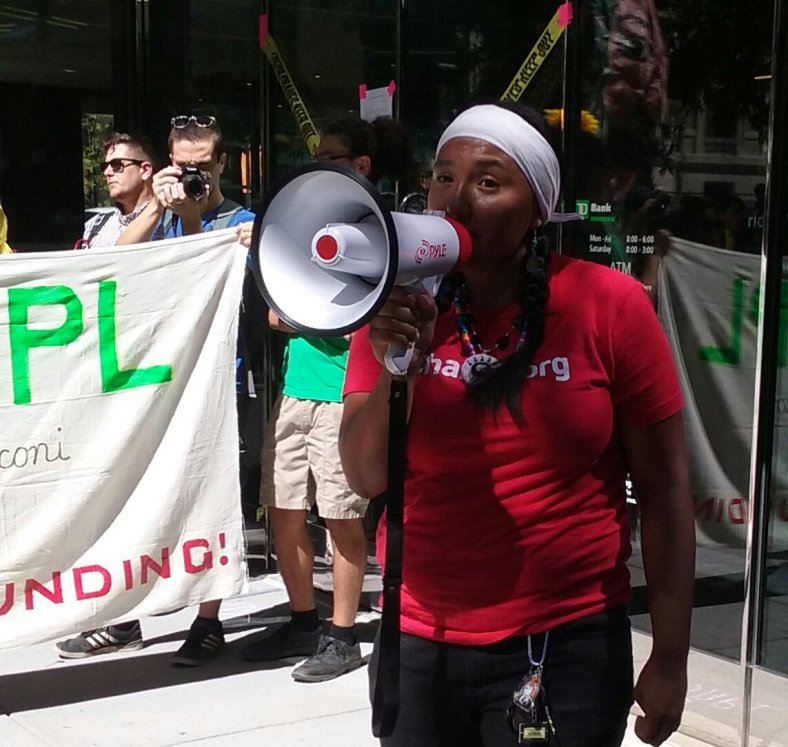 Lauren Howland says she has felt like “a tourist in my own land.”

“It’s funny how I felt like a tourist in my own land,” Howland said. “My ancestors died here. … Everywhere there’s a building built, my ancestors are underneath. … Everywhere in America is built on my ancestors’ [burial ground]. That is desecration.”

She said about 5,000 people are at the Sacred Stone and Red Warrior camps near the Standing Rock Sioux Reservation in North Dakota. “Money doesn’t exist at Standing Rock, and we are making it work very well,” she said. “To TD businessmen and women:  You have caused violence. … You cannot drink oil.”

Gonzalez and Howland plan to take their urgent message to President Obama and Congress. “They need to know that Native Americans are no longer expendable,” Howland said. She added that she is relearning her culture and Native ways:  “I am decolonizing my people.”

“We are living proof that we are not giving up,” she said. “A hundred million Native Americans died to make the United States what it is today. … It was stolen; it was genocide.”

After writing #NoDAPL messages in chalk on the sidewalk, the group headed for a second TD branch on 14th St. NW, where the doors had already been locked.

Activists are sending a message to TD bank officials, customers and employees that they don’t approve of their investments, said Gabe Shapiro of BXE and Chesapeake Climate Action Network. “It is 2016. It is time for us to take a moral stand on these issues, whether or not it’s your job, whether or not it’s how you put food on the table for your kids,” he said. “This bank right now is funding the destruction of Indigenous sovereign land, land that was granted to be Native land. It was the concession to them – after we stole it from them and invaded this country violently.”

“Every person working for this bank is complicit,” he said. “This bank is profiting off of genocide of the Indigenous people in this country.  Is it not enough, everything that has been done? Is it not enough? When do we draw the line?” He called on the president to stop the pipeline or be prepared for more actions and arrests. “This pipeline is already history,” Shapiro said.

“The federal government has paused the pipeline, and its future is uncertain,” said BXE member Drew Hudson. “It would be prudent for TD’s customers, and for the planet, if they pulled the funding now and invested in clean energy instead.”

Since April, Native Americans and their allies have flocked to the Sacred Stone and Red Warrior camps. The tribes are seeking supplies and preparing to stay until the pipeline is stopped permanently. 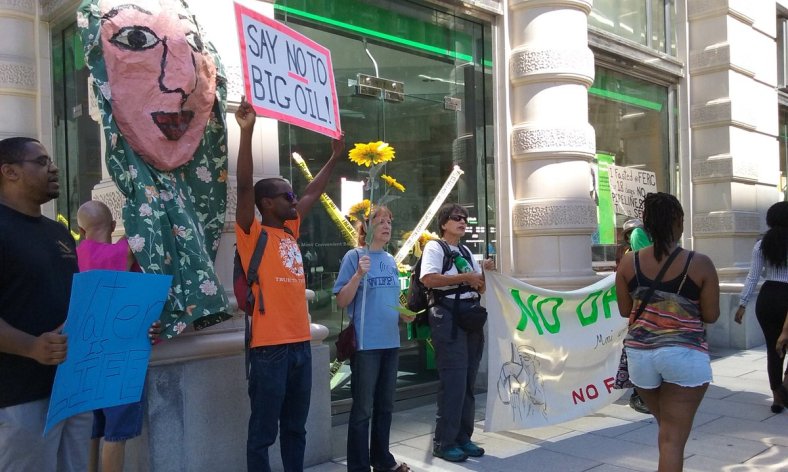