Words from the field: 350 Plattsburgh in New York!

“Part of Beyond Extreme Energy’s #RUBBERSTAMPREBELLION – a local action targeting FERC and the Saranac Power Partners Liquid Petroleum Cogeneration Power Plant in Plattsburgh New York. To the Federal Energy Regulatory Commission (FERC) We demand: No NEW Fossil Fuel Permits and 100% Prioritization of Renewable Energy i.e. wind, solar and other renewables and demand to end the fossil fuel regime. This is the #RubberStampRebellion! 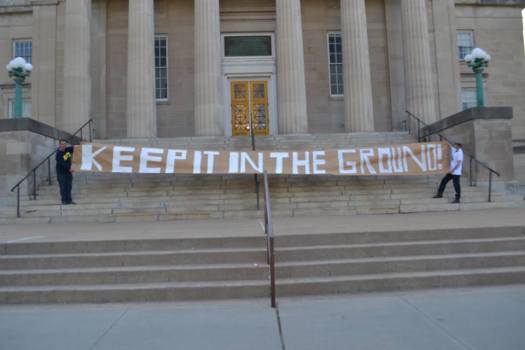 Two separate actions on two separate days in Plattsburgh, New York. Banner drop at City Hall in downtown Plattsburgh and a photo opportunity and bike mass at the Saranac Power Partners power plant outside the city limits of Plattsburgh. This power plant is not only a presence within the community of Plattsburgh, but it also is a symbol of the expansion of natural gas infrastructure and markets into the Adirondacks of New York. 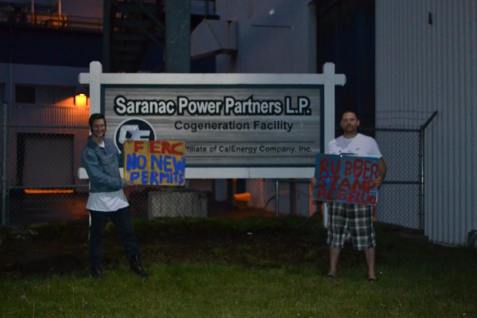 Therefore it is a symbol of infrastructure and markets citizens must end from growing. 350 Plattsburgh demands to #KEEPITINTHEGROUND and asks FERC to approve #NONEWPERMITS. This is part of the week of actions that are occurring across the United States.

The symbol also tells a story of the combination of dangerous fossil fuel infrastructure that reside across the continent from California to Maine. This power plant resides directly next to a rail line that carries Bakken Crude Oil to the Port of Albany in Albany, New York. Two hours from this location was an explosion from a Bakken Crude Oil train in Lac Megantic, Quebec that echoes a foreboding warning that if we do not stop burning fossil fuels and approving pipelines/fossil fuel infrastructure, our communities are in danger in the context of not only one fossil fuel, but from entertaining risk of a multiple triggered event. The rails skid close to a fracked gas power plant whose explosive power could multiply a catastrophe, a triggered explosive event of fossil fuel proportions, where two separate fuel sources could set off a crisis with their combined explosive force.

If a derailment of Bakken Crude Oil were to derail into this power plant, nestled in a poor but quiet neighborhood, directly next to power lines, the New York State Thruway (interstate), directly beside a wetland this could create a social, environmental and political crisis the Adirondack region never could have seen.

We do not want fossil fuels, the costs outweigh any benefit in our eyes. We want safe renewable sustainable energy that does not threaten our livelihoods, pollute our air and poison our children, families and planet. We joined together over these two days to say #FERC #NONEWFOSSILFUELPERMITS #YESRENEWABLES #ENDTHEFOSSILFUELREGIME.

Today we stand together.”