Every third Thursday, the morning bustle of Washington, DC’s Union Station plays host to a monthly prelude. Small tables are haphazardly pulled together and the 8am ritual commences. Gathered in a circle and passing around food and coffee, we plan our next round of unwelcome Truth Injections. The objective–to crack a little known but terribly powerful entity near the heart of the Fracked Gas Empire. This entity is frightening, but it houses no monsters. Instead, it houses something far more grotesque–a form of unacknowledged violence persisting under a bureaucratic veneer. Some call it the Federal Energy Regulatory Commission (FERC). I call it the worst kind of nightmare.

Captive to the fracked gas industry and rubber-stamping virtually every project that comes before it, FERC inspires goosebumps in the night. Every permit for fossil fuel infrastructure that FERC issues is an act of violence perpetrated against the people and the planet, poisoning local communities, and polluting the global climate.

The circle of those standing up to say no grows.

Last month, five people took turns standing up and speaking out at the public meeting FERC commissioners are required to convene every third Thursday.

Tim was first to stand up in the meeting room. Here’s what he had to say about FERC: “They segment everything, so they look at one pipeline and think ‘no problem, it’s not going to harm anything.’ But if they were to do what they’re supposed to do and look at all the pipelines, consider the fracking, the damages that fracking does, consider the impact economically to the country, environmentally to the country and the world, and consider that whole ball of wax, it’s a no brainer.”

Thanks to Ashley, we have some footage from inside FERC. Take a look. Here, Carol is taken from the room for calling on the commissioners to put people over profits.

After the meeting, Carol  was met outside by Lee Camp (host of Redacted Tonight) and Eleanor Goldfield (host of Act Out), who both attended the meeting to witness and document the actions. 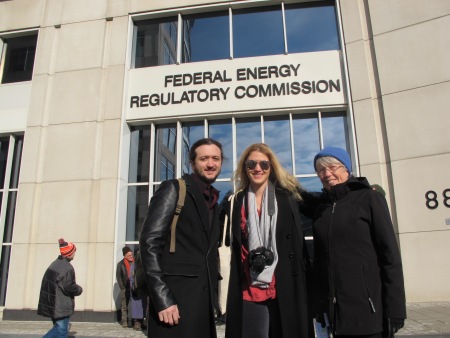 Of the day’s FERC meeting, Eleanor wrote “The meeting began with a circle-jerk style ceremony including a congratulatory plaque awarded to some guy for doing something completely unrelated to the day’s proceedings. Then, the members of the Commission, including Chairman Norman C. Bay, took turns congratulating each other on being awesome, informing the room that they like football, just got a twitter account and isn’t the work we do just so awesome!? It sounded like the sort of banal conversation you might hear made fun of in an episode of The Office, but these people were supposedly here to discuss the FUCKING ENERGY CONCERNS OF OUR NATION!” Read more here.

Betsy was taken out in a similar fashion.

The below exchange happened between Betsy and outgoing FERC Commissioner Tony Clark before she was made to leave. 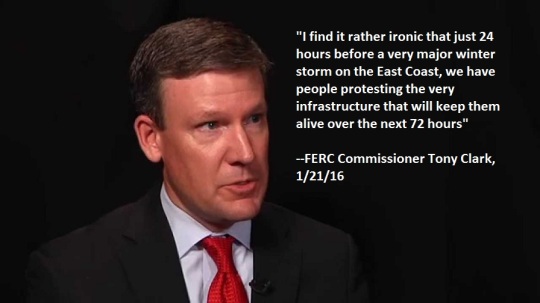 Read more about this exchange and the action as a whole from DC Media Group.

Drew Hudson of South Carolina had powerful words as well: “Last month 195 nations, including the government that this commission is supposed to work for, agreed that climate change is an imminent threat, and that global warming must be capped at 1.5-2 degrees celsius. To do this we must keep 80% of fossil fuels in the ground. By continuing to approve fracked gas infrastructure, you are perpetuating what Bill McKibben calls “Zombie fossil fuels” that will stay in operation for more than 40 years and doom our climate – causing the loss of many lives and livelihoods as a result of climate chaos. I urge this commission to stop approving the problem, stop fracked gas infrastructure and work with impacted communities to rapidly invest in a just energy democracy for all.”

The last people out of the room were Ashley Tuhro and her two kids, who came all the way from Witchita, Kansas, where fracking is causing earthquakes.

Once a person speaks out at FERC, they’re not permitted to return to the meeting room itself. Presumably due to sunshine laws, however, they are permitted into an overflow room adjacent to the main meeting room. In January, a group of folks gathered in the overflow room to sound the alarm on a sleeping FERC.

Afterwards, a successful crew gathered outside for chants.

Throughout the whole morning, others stood outside FERC handing FERC employees an open letter, pictured below. It was about the effort Delaware Riverkeeper Network is leading to get US Senators Elizabeth Warren and Bernie Sanders to request a GAO investigation of the agency. For more information and to add your name and organization to the letter, click here.

Please join us for one of the upcoming actions at FERC in Washington, DC. They’re held the third Thursday of every month. If you’d like to receive updates, sign up here.