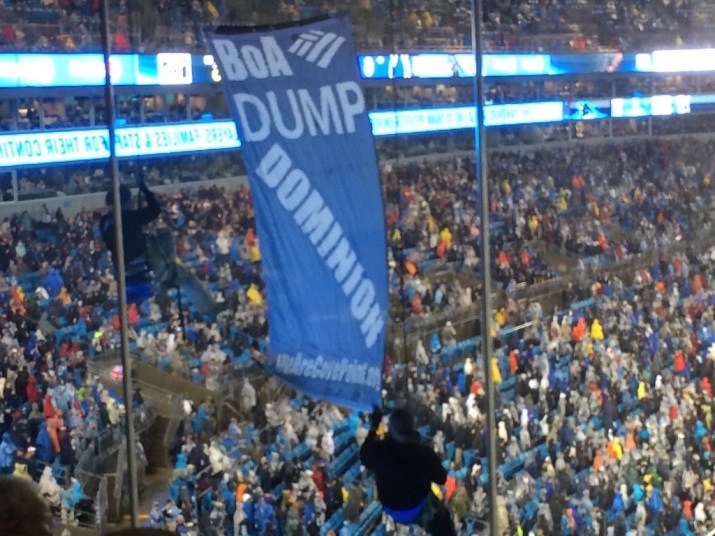 CHARLOTTE, NORTH CAROLINA — In protest of Bank of America’s role in financing the planned liquefied natural gas (LNG) export facility in Cove Point, Maryland, activists from We Are Cove Point have suspended themselves from the upper deck of Bank of America Stadium during the Monday Night Football game between the Charlotte Panthers and the Indianapolis Colts. They dropped a banner that reads, “BoA: Dump Dominion, WeAreCovePoint.org,” that was seen by the stadium audience of more than 70,000 people.

Since oil and gas prices have plummeted, industry experts have increasingly seen LNG export facilities as bad investments, and the financial sector has been inexplicably propping up the gas industry. As recently as August, a report from Bank of America itself warned that plummeting crude oil prices have hurt the prospects of LNG export projects. President and CEO Zin Smati of Engie’s GDF Suez Energy North America said, “You cannot ship gas from the United States anymore. … Nobody really is making money from LNG now. Certainly, we are not.”

Dominion Cove Point is a proposed LNG export terminal that is slated to send up to 1.8 billion cubic feet of LNG to Japan and India. The facility would be the only one in the world to be built in a densely populated area, in violation of basic safety siting standards. It would drive demand for harmful fracking across the Mid-Atlantic, emit more than 20 tons of hazardous air pollutants each year, and spew two million tons of greenhouse gases, making it Maryland’s fourth-largest climate polluter. LNG exports are predicted to increase domestic gas prices, resulting in economic loss for every major sector of the US economy besides the gas industry, according to a Navigant Consulting report commissioned by Dominion Cove Point and a NERA economic consulting report commissioned by the U.S. Department of Energy.

As more communities organize against the encroachment of gas infrastructure, Bank of America and other lending institutions are facing increasing pressure to stop financing dirty energy projects that negatively impact the lives and well-being of those living near export terminals, pipelines, compressor stations, fracking wells and gas-fired power plants.

Participants in tonight’s action made the following comments:

“Bank of America is allowing companies like Dominion to operate without checks and balances,” said John Nicholson. “They are giving money directly to Dominion with full knowledge of the health and safety risks of building an LNG export facility, and they need to be accountable to that.”

Rica Madrid said, “America doesn’t need more cheap fuel on the market, and we especially don’t need to export those resources overseas. Dominion is building a facility that would contribute to the economic crisis our country is facing. Bank of America is financing the Cove Point LNG plant, and the surrounding community in Southern Maryland is forced to bear the human cost. This is unacceptable.”