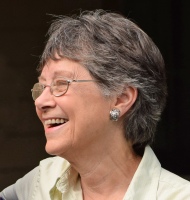 at a scoping meeting of the Federal Energy Regulatory Commission. The hearing, held at Central Connecticut State University in New Britain, CT was on Thursday, July 29, 2015. Subject of the hearing: the proposed expansion of the shale gas pipeline, Northeast Energy Direct, a project of Tennessee Gas and Kinder Morgan Energy.

Good evening. My name is Carolyn Shaw. I’ve lived in Middletown for close to 50 years.

As a woman of the Christian faith, I have been considering the moral implications of this scoping hearing and the Northeast Energy Direct project. I myself am directed less by facts and figures, troubling though they may be, than by the stirrings of my heart.

Like me, you may have heard the following verse from Psalm 8 in the Christian Bible many times: “When I consider thy heavens, the work of thy fingers, the moon and the stars…what is man that thou art mindful of him?”

Tonight I wonder… Aren’t we all infinitesimal parts of the great Universe mentioned by the psalmist? By virtue of the complex brains of our species, don’t we have the responsibility to be deliberate in all things? (As we raise our children and grandchildren? In the communities we choose to inhabit over the course of our lives? At our places of work and in our careers? On behalf of the Earth and of those humble species that cannot speak for themselves?)

With regard to this hearing and project I also wonder… To what extent, if any, should decisions made by individuals at the Federal Energy Regulatory Commission be exempted from the rigorous ethical parameters other people try to follow in their lives? And if they are to any extent exempted can and should that be changed?

For many months people and organizations have been reaching out to FERC attempting to comply in good faith with its processes, dutifully filing required documents and attending scoping hearings such as this one. No actions have lessened the number of permits granted or ensuing damage to the Earth. The necessity for increased moral reflection by FERC as it makes permitting decisions has become clear to me. I suggest that there be both Environmental and Ethical Impact Statements: the existence of these two types of EIS will encourage more balanced decision making. Decisions to approve permits will be made in a more balanced way. Two sides of the equation will be taken into account: the need to protect the Creation for which all humans are stewards and the need to exhibit the noblest of ethical behavior .

As FERC’s process stands now- in a system without balance- FERC is the Generator- Beginner of projects which, once given an official blessing in Washington, can be moved along to the states. When a project has been blessed by the five commissioners, all actors at FERC- from the Commissioners appointed by Congress to legal staff and support personnel- emphasize and give priority to the plans of and profits from requesting energy companies. The wishes of hundreds of people who have raised their voices in dissent again and again, people whose health and livelihoods have been enormously impacted, are given only slight consideration by offering token scoping hearings.

Two weeks ago I watched the videotape of a homeowner’s impassioned plea before a meeting such as this one in Massachusetts. She and her husband own a house on 22 acres of a beautiful state forest. As birders, they have counted over 50 species on their property. The home has been their lifelong dream. Spectra Energy’s plan to site a compressor station 1500 feet from their property line, permitted by FERC, has suddenly put them into an untenable position: no one will buy their house once the land has been ruined; even if a buyer could be found, no mortgage company would grant a loan on their compromised property. After years in their home she and her husband will have to leave it. At the end of her testimony she fell to her knees and begged. Were not ethical choices made here, choices with human consequences?

I will guess that by now you know my bias has emerged. I like to think that I take the side of the God who created us all and expects much from us in return.

From poet and writer Wendell Berry, two stanzas of his poem, “Questionnaire”:

How much poison are you willing to eat for the success of the free market and global trade? Please name your preferred poisons.

In the name of patriotism and the flag, how much of our beloved land are you willing to desecrate? List in the following spaces the mountains, rivers, towns, farms you would most readily do without.

Final thoughts: As adults we make hundreds of choices, weighing possibilities. Despite the politics, despite the lobbying from oil and gas companies, despite peer pressure from those around you, my hope is that each person leading this scoping meeting will choose to be the greatest possible version of him or herself. Listen to your mandate as an ethical human being. Whether you work on First Street in Washington or represent the agency in other parts of the country let the moral dimensions of your choices rise to the surface of your minds like bubbles as you live out your days.

Again from Psalm 8: “For thou hast made him a little lower than the angels and hast crowned him with glory and honor. “