“Stop the #FERCus” was the theme of the 10 days of action in Washington, DC and Calvert County, Maryland, which ended yesterday, and that was the main focus, no doubt about it, but it was about so much more. These 10 days of action and organizing were all about building community—a community taking action and interacting with one another and with others in a way which builds people power. 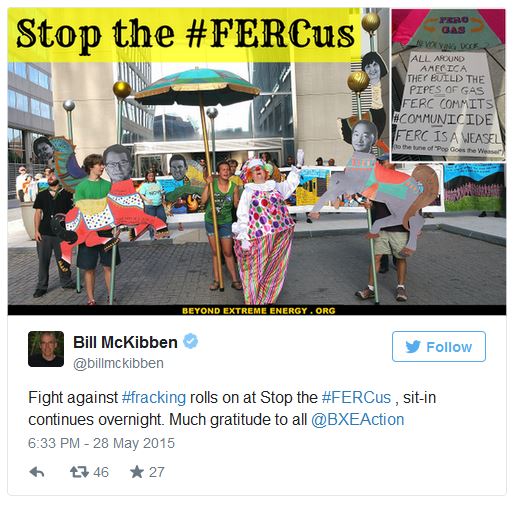 45 years ago when I was young and new to progressive activism, “building power” wasn’t a phrase I remember hearing. “Taking power” was, however. For many of us, the realities of systemic oppressive power we experienced through our involvement in the civil rights, black liberation, anti-war, women’s, gay/lesbian rights or other movements of that time led us to see the need to take power away from the rich white men who were pulling the strings behind the scenes if we were to have any chance of building a truly democratic and just society.

I continue to believe that. The power and wealth of those rich white men has only gotten worse over all those years, as have obscene inequality and the climate and broader environmental crises. But the experiences of May 21-30 have made me see more clearly why “building power through building community for power” is a much sounder way to frame a key aspect of the historic task before us.

What took place over these 10 days to prompt these reflections? From May 21-29 Beyond Extreme Energy (BXE) took action in Washington, DC focused on FERC, the Federal Energy Regulatory Commission, the most powerful federal agency most people have never heard of. And on May 30th Calvert Citizens for a Healthy Community, We Are Cove Point and other groups organized a spirited and strong six-mile march of close to 200 people through Calvert County in opposition to the building of a massive and dangerous gas export terminal at Cove Point. 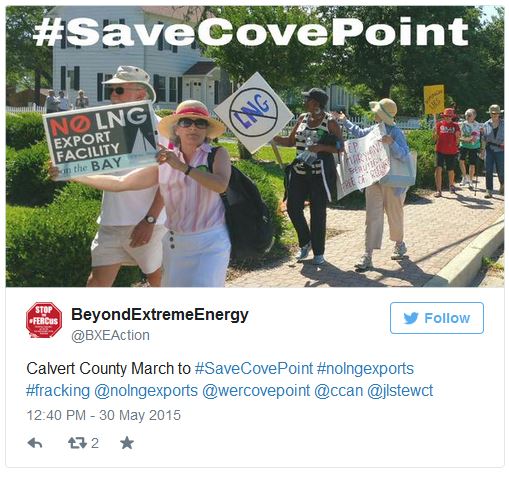 BXE is a new, growing national network of 70 organizations focused on fighting extreme energy extraction in general and, right now, the “gas rush” expansion of fracking infrastructure which FERC is actively enabling. FERC is a rubber stamp for the gas industry as it moves to expand fracking and to build export terminals to ship that fracked gas around the world. Here are some of the highlights of our 10 days (for more info go here):

These were the main actions which took place over these 10 days. It was possible to do them all because of the kind of personally supportive and participatory and love-filled culture which undergirded decision-making. This culture affected how we dealt with differences or conflicts and how we interacted with others on the street, including the Federal Protective Services police.

One of the concepts George Friday spoke about in her anti-oppression training was the concept of “the strategic use of privilege.” As far as our interactions with the police, this concept is relevant. The vast majority of participants in Stop the #FERCus were of European descent. This influenced how the police reacted to us, although it wasn’t just the white skin of most of us. It was also our level of organization, our nonviolent discipline (which, from all I saw and heard, was 100 percent effective) and our willingness to talk in a respectful if upfront way with the police when we needed to. It is no small thing that we were able to manifest this positive culture throughout 10 very intense and often stressful days of pretty kick-ass actions. They’re connected; without that culture of support and love, we would not have maintained the unity and organic discipline which we did.

And so we built community to build people’s power, and we showed that power. FERC employees who couldn’t get in the building or who stayed away felt it. So did the Federal Protective Services police who couldn’t help but smile when they saw the FERC-GAS-GO-ROUND and heard the new verses to “pop goes the weasel” with the final line being, “FERC is the weasel.” So did NPR management whose response to our loud flooding of their lobby was to send police to threaten us with immediate arrest if we didn’t immediately leave. So did the employees at the American Natural Gas Alliance who moved away from their desks and left a lone guy to keep saying, “you have to leave,” in response to our statements and our chants. Then there is the unknown person who was supportive of what we were doing who ended up by accident in the elevator with our ANGA “delegation” who used his electronic key to allow our delegation to get into ANGA’s 8th floor office.

Beyond Extreme Energy is feeling its power right now, and as we said loudly to anybody inside the FERC building who was there on our last day, “we’ll be back.” In our final debrief Friday on the sidewalk across from FERC, a number of ideas about what we should be doing going forward were put forward. We will be reaching out to frontline groups, BXE endorsers and other allies as we figure out next steps. We will be considering how we might relate to several initiatives that have been undertaken for actions in late summer and fall in the lead-up to the UN Climate Conference in Paris in December. We welcome input and look forward to figuring out together our next steps to Stop the #FERCus and build a strong climate justice movement. Si, se puede!