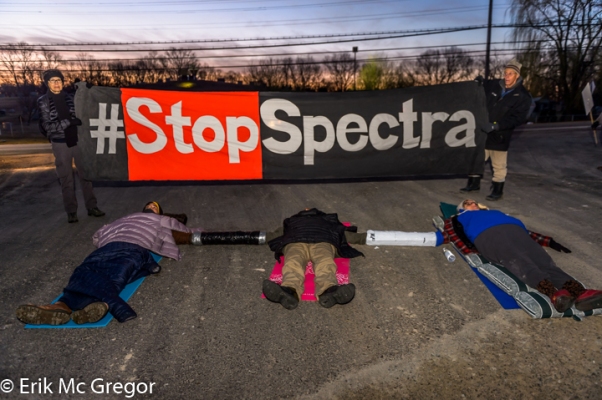 Buchanan, NY 02-29-16 – Today at 6 AM, 26 people took action to stop the AIM pipeline from being built in Westchester and Rockland by blocking access for over an hour to Spectra Energy’s staging area for horizontal drilling under the Hudson River. Spectra Energy’s Algonquin Incremental Market (AIM) project would involve drilling underneath the Hudson River in Verplanck, immediately south of Indian Point Nuclear Power Plant. The new high-pressure, 42-inch diameter pipeline would run within 10 5 feet of critical infrastructure for Indian Point , and would expose local communities to toxic emissions from compressor stations along the pipeline path.
The group of activists and residents chose the site because it highlights the danger of the proposed pipeline, running underneath the Hudson River and adjacent to the troubled Indian Point Nuclear Power Plant. In May of 2015 , Spectra Energy had a pipeline rupture underneath the Arkansas River and w as unaware of it until the Coast Guard informed them. “If Spectra cannot adequately maintain and monitor their existing pipelines, why should we believe that they can do so for this new pipeline?” asked Erik Lindberg, a Peekskill resident who works with ResistAIM.
Governor Cuomo agrees. Today his administration announced that it will be conducting an independent safety assessment of the AIM Pipeline and its proximity to Indian Point Nuclear Power Plant. The governor told the New York Times, “The safety of New Yorkers is the first responsibility of state government when making any decision.” Further, the administration is asking FERC to suspend their approval of Spectra’s AIM Pipeline pending the results of the analysis, a move that could halt construction of the controversial project.
Courtney Williams, a spokesperson for ResistAIM said, “We strongly support the Governor’s decision to conduct this independent assessment given the ongoing public safety concerns of siting this massive pipeline adjacent to Indian Point and the repeated incidents of fires and contaminated water leaks that are happening there. We share the Governor’s concerns and hope his administration will instruct the New York State Department of Environmental Conservation to reevaluate the water quality certificate in light of these ongoing problems.”
Susan Van Dolsen, cofounder of Stop the Algonquin Pipeline Expansion (SAPE) was similarly muted in her response to the news, “We’re relieved and grateful that Governor Cuomo recognized that construction of the Spectra AIM pipeline at Indian Point must be halted. However, construction must be halted immediately. By directing his administration to conduct an independent risk assessment, he is fulfilling his primary obligation to protect the health and safety of his constituents and the 20 million people in the entire region. The risk assessment will prove that the siting of this pipeline in this location is unacceptable. However, until construction is actually halted and Spectra is stopped, we cannot claim victory.”

The pipeline is being built against the wishes of the local communities from Rockland, Westchester, and Putnam , which have all passed resolutions opposing it. In some areas Spectra Energy has used eminent domain to seize property for construction against the will of landowners and homeowners. This has outraged residents and environmental and public safety advocates who point to Spectra’s abysmal safety record as proof that the company cannot be trusted to construct a pipeline safely. 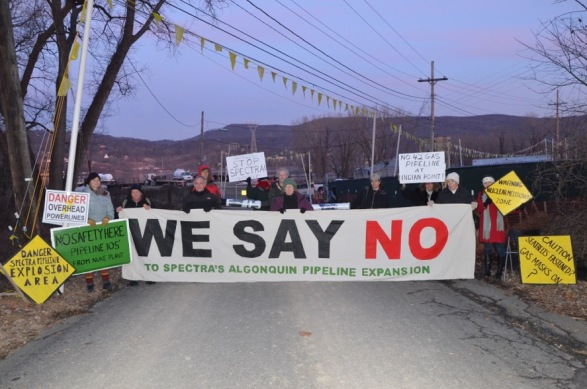 Tina Bongar, of Peekskill, was one of those arrested. When asked why she was taking action she said, “I’ve written to Senators Schumer and Gillibrand many times. I’ve written to Hillary Clinton. I have done everything. I am also working at the local level, and that’s where I’m really concerned about the oversight. Spectra’s going to be blasting near our neighbors ’ homes , and they’re not doing the proper environmental assessment that they would for any other project.” 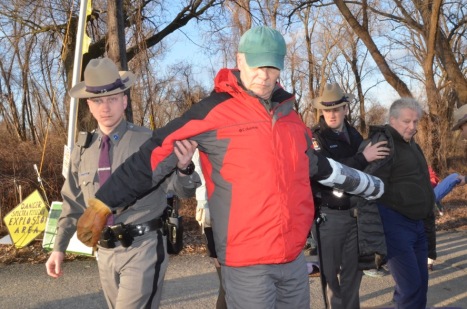 Today’s action is just the latest of several organized locally by a coalition called Resist AIM, which was formed to stop the project from moving forward. The “Montrose 9” were arrested back in November of 2015 for blocking access to Spectra’s construction yard in Montrose. Their trial in Cortlandt is drawing national attention as they use the “Necessity Defense” to justify their actions to protect their health and safety and halt global climate change.
Nancy Vann, a Peekskill resident and President of Safe Energy Rights Group (SEnRG), participated in the action in Verplanck.  Speaking about her motivation Vann said, “This is something we really must do. As Bill McKibben said at Yale Law School on Saturday, ‘ we’re not in an argument anymore we’re in a fight. And even though the science is against them , the folks with the money have been winning. ’ The window of opportunity to stop this pipeline and a possible nuclear catastrophe is rapidly closing – just like the window to avoid the worst of climate change. I never want to look back and wonder if I might have fought a little harder.” 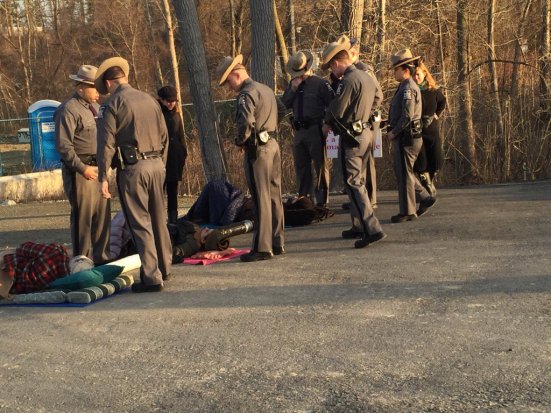 ResistAIM is not alone in their opposition to the AIM Pipeline. Similar groups have formed all along the route of the AIM Pipeline using direct actions to halt Spectra’s work in Connecticut, Rhode Island, and Massachusetts.
This groundswell of direct action resistance to the Spectra pipeline follows years of residents and local governments from New York to Massachusetts trying to stop the project through standard regulatory channels. This regulatory failure demonstrates that the agencies involved – the Federal Energy Regulatory Commission (FERC) and the Nuclear Regulatory Commission (NRC) – are unwilling to consider the full impacts of this project. Congresswoman Nita Lowey and Congressman Elliot Engel wrote to FERC and the NRC saying, “…As elected representatives of residents in the Hudson Valley, we believe FERC and NRC’s primary responsibility should be to protect the health and safety of the 20 million people who live within the 50 mile radius of [ I ndian Point ] .  Despite the widespread calls for an independent risk assessment, FERC and NRC have disputed the need and instead relied on Spectra and Entergy’s calculations…we call on FERC and NRC to require Spectra and Entergy to fund an independent transient risk assessment for the AIM Project as soon as possible.”
As Spectra fast – tracks construction of the pipeline, municipalities and organizations from Boston to New York are preparing to take FERC to Federal Court to challenge the pipeline approval. Despite these numerous outstanding legal challenges, Federal law allows Spectra to proceed with construction, leaving impacted communities no recourse for having their concerns addressed while faced with imminent harm from pipeline construction and operations.
In addition to its obvious safety and security risks, the AIM pipeline would increase our dependence on climate-changing fossil fuels at a time when the nations of the world are increasingly recognizing the need to move to renewable energy.
Video: https://www.youtube.com/watch?v=KR8lNoZ-oMs
Cuomo Administration letter to FERC: tinyurl.com/Cuomo-FERC-AIM-Letter
This is only the beginning. For more information, please visit www.resistaim.wordpress.com
https://www.facebook.com/resistaim/
https://twitter.com/ResistAIM
#ResistAim #StopSpectra #WeSayNo